The term thong bikini refers to the amount of rear coverage offered by the swimsuit bottom, teddy, panty, etc.   A Thong Back bikini has a coverage area more than a T-Back bottom, but less than a Brazil bottom.

The Thong is a garment generally worn as either underwear or as a swimsuit in many industrialized societies around the world. It may also be worn for traditional ceremonies or competitions such as sumo wrestling. The thong continues to be worn as everyday wear, as it has for often hundreds or thousands of years, mostly by men, in many indigenous societies, particularly in Africa, South America, and Asia. 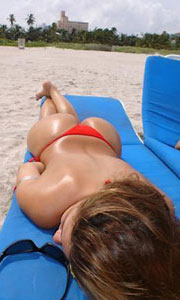 Viewed from the front, the thong typically resembles a bikini bottom, but at the back the material is reduced to a minimum. Thongs are almost always designed to cover the genitals, pubic hair, anus, and perineum, and leave part or most of the buttocks uncovered. The back of the garment typically consists of a thin waistband and a thin strip of material, designed to be worn between the buttocks, that connects the middle of the waistband with the bottom front of the garment. It is also used as a descriptive term in other types of garment, such as a bodysuit, bodystocking, leotard or onepiece swimsuit in the context, “thong backed.” 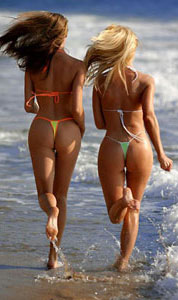 One type of thong is the G-string, the back of which consists only of a fabric string.   This type of thong bikini bottom is also called a T-back because of the way the strings intersect in back to form a “T”.   The 2-piece bikini set in this format is sometimes referred to as a string bikini.  The two terms G-string and thong are often used interchangeably; however, they can refer to distinct pieces of clothing. Thongs come in a variety of styles depending on the thickness, material, or type of the rear portion of fabric and are available for both men and women throughout most of the world. 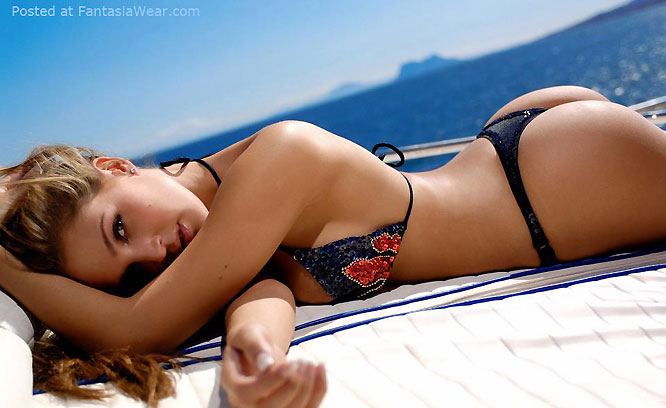